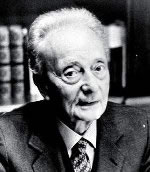 Nicola Abbagnano was born in Salerno, 15 July 1901, first-born of an intellectual middle-class family of that city (his father was lawyer). He studied in Naples, graduated in philosophy in November 1922, followed by Antonio Aliotta as his teacher and his graduation thesis, from which his first book: “The irrational sources of thought” (1923). Then he touched philosophy and history at Liceo Umberto I of Naples. From 1927 till ’36, he touched pedagogy and philosophy by Institute of Teaching “Suor Orsola Benincasa”; meanwhile he collaborated at magazine “Logos” edited by his teacher Aliotta. From 1936 till ’76 he was ordinary teacher of history of philosophy at university in turin, first at teaching faculty and then, starting from ’39, at literature and philosophy faculty. After second war, he was one of the founder of centre of methodological studies in Turin. In 1950, he founded, together with Franco Ferrarotti, “Books of Sociology”; since 1952 he was director, together with Norberto Bobbio, at “Magazine of Philosophy”. Between 1952 and 1960, he inspired the group “New-Enlightenment”, arranging meetings for scholars of lay philosophy. In 1964, he started collaboration at “La Stampa”. In 1972, he moved to Milan where, left the from Turin magazine, he started to collaborate at “Giornale” of Montanelli and, also, he was in charge as town councillor, elected in the lists of liberal party and borough council clerk of culture. He died the 9th September 1990. He is buried in the cemetery of Santa Margherita Ligure, where, since many years, he used to spend his vacations. The theoretical production of Abbagnano during his Neapolitan period –represented, beside “The irrational sources of thought”, by three volumes dedicated to “The problem of art” (1925), to “The new physic” (1934) and to “The problem of metaphysic” (1936)- can be placed under the double sign of Aliotta teaching, from which he achieved the interest for the methodological problems of science and of the polemic anti-idealistic, above all very evident in the volume about art. When he moved to Turin, he turned to the study of existentialism, toward where the Italian philosophic culture was turning at that time and he elaborated an original version in a book that cause great interest, “the structure of existence” (1939); then it followed “Introduction to existentialism” (1942) and the essays collected in “Philosophy Science Religion” (1947) and in “Positive existentialism” (1948). In 1943, he had a first level part in the discussion about existentialism that developed on “Primato”, the magazine of fascist party bossed by Bottai. But already, in the years immediately after the war, the interest of Abbagnano turned to the American pragmatism, above all in the version that John Dewey gave, and to the philosophy of science, particularly to new positivism. In existentialism, Abbagnano used to see the manifestations of a new philosophic climate that he marked, in an article of ’48, as a “new Enlightenment”. The development of his thought, in the fifties, was distinguished from one side by the interest for science, particularly for sociology, for the other side by the attempt of define the programmatic lines of a new Enlightenment philosophy or, as he called it later, of a “methodical empiricism”. They go back to that period, the essays collected in “Possibility and freedom” (1956) and in “Problems of sociology” (1959), but above all “The dictionary of philosophy” (1961), a real summa dedicated to the clarification of main philosophic concepts. Next to volumes and essays of theoretical character, Abbagnano also issued, since he was young, many historical monographs: “The new American and English idealism” (1927), “The philosophy of E. Meyerson and the logic of identity” (1929), “Guglielmo D’ Ockham” (1931), “The notion of time according to Aristotele” (1933), “Bernardino Telesio” (1941). But his biggest historical undertaking is “The history of Philosophy” published by U.T.E.T. (1946-50), preceded by a compendium of history of philosophy for the schools (1945-47). To that it followed, a few years later, a compendium dedicated to the history of sciences, even this published by U.T.E.T. (1962). The production of the last decades, starting from middle of sixties, is mainly built by articles appeared on “La Stampa” or on “Giornale”, then ran in various collections: “For or against the man” (1968), “Between the all and the nothing” (1973), “This crazy philosophy” (1979), “The man project 2000” (1980), “The wisdom of life” (1985), “The wisdom of philosophy” (1987). The last book, appeared a few months before his dead, is an autobiography “Souvenir of a philosopher” (1990).